Looking at my angry wall, I need to write something down.

Tutors and classmates told me lots of times “I don’t like you write on your painting, you should let people guess the meaning of your painting, instead of telling them. ”

But no, I don’t need people to guess the meaning, I prefer telling them directly what I want to say. Like how Activism did in their artworks.

I’m tired of explaining, again and again. This is what I want to say, except it or not, like it or not, up to you.

“I’m teaching you how to learn. You need to learn how to be a student.” This is what the Korean woman told me during a tutorial, when I had different opinions with her.

“You need to learn how to be a tutor, and deal with students like me !” I replied.

I can’t believe it, am I really studying at an international art school in London? Someone is still using the Asian way to ‘teach’ a student how to paint, what is right and what is wrong. What happened to female tutors? Who do they think they are?

“You need to learn how to be a student.” — It echoed in my head throughout the day and night. I need to write it down to let everyone know what she told me, and let her know my response too.

So I come to school on Saturday morning and used the white paint to write as big as I can:

YOU NEED TO LEARN HOW TO BE A TUTOR
AND DEAL WITH STUDENT LIKE ME. 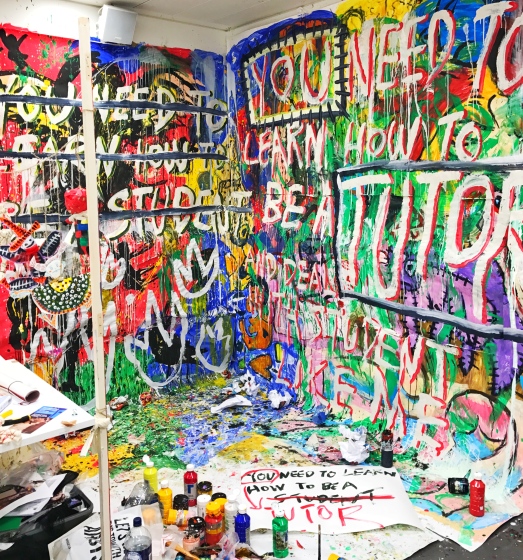 I also draw some symbols of fire, it’s from the earliest known form of Chinese writing used on turtle plastrons — Oracle bone script — in the late 2nd millennium BCE. I chose different Chinese characters to see which one could be the symbol, FIRE is my final choice.  Like off white and Niki, I look for something simple symbols as my brand logo, the oracle bone script of fire could a choice, but I need to research more words to choose, like 凹 凸 同 鸟.

Looking at the wall with words, I suddenly remembered some paintings and installation I did in Afghanistan.

So I did these two paintings after coming back home:

All women need to cover their body in Afghanistan, as a woman who needed to cover myself too, I felt so unbreathable, I didn’t have any freedom.

So I made two installations, I made a male mannequin in a black chador, and a naked female mannequin whose chador flew away. I colored the body of the female mannequin and wrote words like “THIS IS MY BODY, NO ONE’S BUT MINE. ” “NO WOMAN CAN CALL HERSELF FREE WHO DOES NOT CONTROL HER BODY. ” “FIGHT FOR IT.” I also wrote “If it’s strange for a man to cover his body, why it’s okay for the woman ?” on a cardboard and put aside the male mannequin. 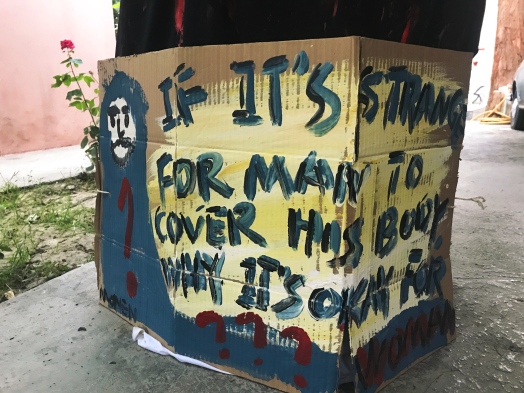 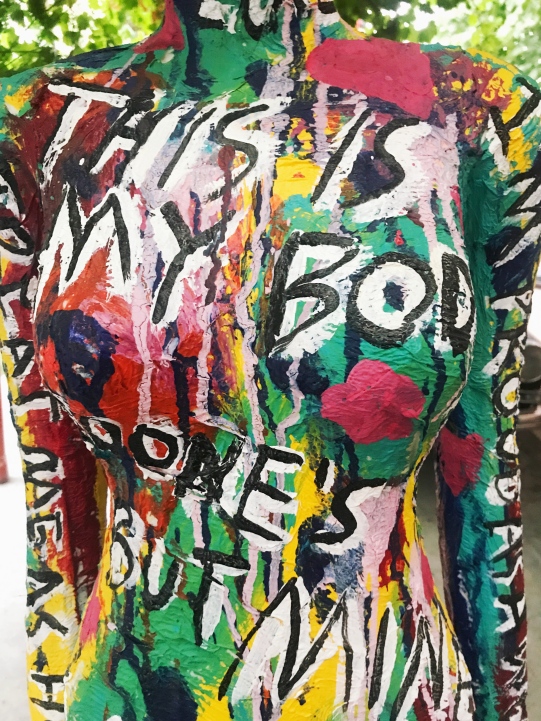 Looking at the painting and installations I did in Afghanistan, and now the wall at school, I did all of them in the same mood — being angry — because I felt someone was forcing me to do something, I was oppressed, I was not willing to, I lost my freedom. 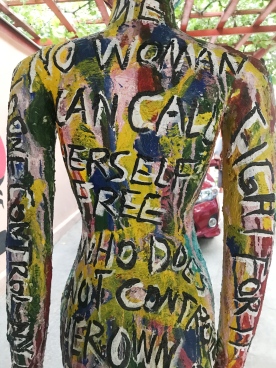 Why do I create this kind of work every time when I’m angry?

Why do I choose these colors when I’m angry?

Why do I like writing words when I need to express my feelings?  What’s the role of texts in art?

How could I visualize the emotion of anger in my art?

Where should I use my anger to respond to?

Can I find another way to present my anger in art?

My mind is full of these questions, now I want to try different materials and forms to present the anger in my artworks.

Btw, compared to yoga, I like boxing, compared to being peaceful, I like myself emotional, but I need to learn what changes my emotion, where and how to use my emotions to create meaningful artworks.