Frieze Art Fair is one of the biggest and most famous art fairs in the world. Every October, Frieze hosts two fairs in London. Frieze London showcases the best of contemporary art, and Frieze Masters specializes in art from the past.

This weekend, I visited both Frieze London and Frieze Masters in Regent’s Park.

It’s amazing to see more than 160 world’s leading galleries, including Pace, Gagosian, David Zwirner, exhibiting over 1000 artworks at Frieze London, I could witness the most exciting and fresh blood of contemporary art. But personally, Frieze Masters impressed and inspired me more than Frieze London, and luckily I could observe these masterpieces closely and learn from them.

I was dazzled by thousands of artworks and took more than 400 photos. Coming back home, I selected 20 artists’ works which inspired me the most and clarified them into three parts: childlike and primitive, lines and space, fabric and text.

Here I would write about the first part, Childlike and Primitive paintings, including 5 artists and their artworks.

” Semiha Berksoy is one of the first internationally recognized Turkish artists. She starred in the first Turkish sound movie and performed in the first Turkish opera. In her works, Semiha Berksoy creates a dimension in which she goes beyond the limits of life, death and time. She paints her passion, love and pain in a linear, ironic and simple way. Placing herself in the center of her creation, Berksoy does not differentiate her life and art; her paintings are extensions of her brave, enthusiastic, disciplined and unique personality, as well as, her comprehensive, multi-disciplinary education and experience.”  — Galerist 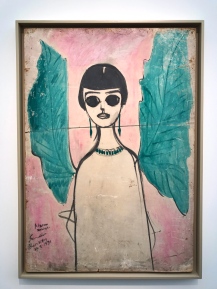 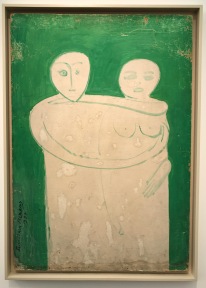 Among all the artworks at Frize Master, Smiha Berksoy’s paintings impressed the most, I guess it’s because of the similarities between us and our works. Both of us like drawing in a linear and simple way, both of us show our enthusiastic and unique personalities as well as varied experience in art, and both of us do painting for ourselves, art and life are together.

Reading her stories about her being a leading cultural figure in the early years of Turkey, I really admire her for her multi-faceted artistic approaches.She motivates me to stick to my style, continue to expand life experience,  and discover more new areas.

Below are more works from Smiha Berksoy, I was mainly interested in her self-portraits, which presented her different personalities, for my own self-portraits, I may use this as a reference. 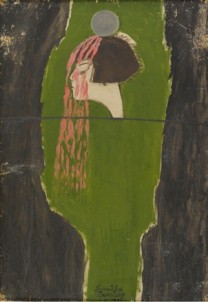 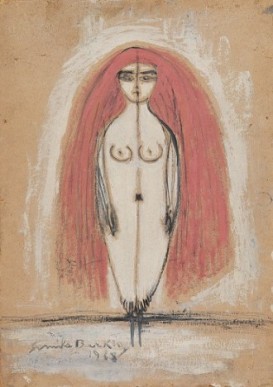 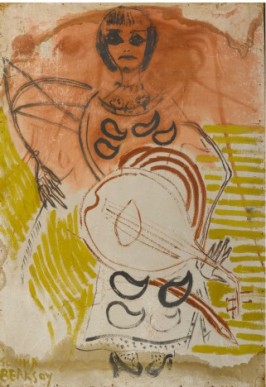 “Earning international acclaim, his work has been interpreted as Surrealism, a sandbox for the subconscious mind, a re-creation of the childlike, and a manifestation of Catalan pride. In numerous interviews dating from the 1930s onwards, Miró expressed contempt for conventional painting methods as a way of supporting bourgeois society, and declared an “assassination of painting” in favour of upsetting the visual elements of established painting.” — Wikipedia

Same with Joan Miro, my art is childlike too. To against the traditional painting methods, I also insist on upsetting visual elements in my artworks. But after looking at his paintings, I understand that why his works are the masterpiece, but mine are still naive and immature in art language somehow. I need to learn from him about re-creation the childlike, find my own visual elements and try more drawing techniques in one painting. For example, in the work of Woman, Birds, Stars, he used Gouache, pastel, pencil and black crayon on paper, even in drawing one eye. 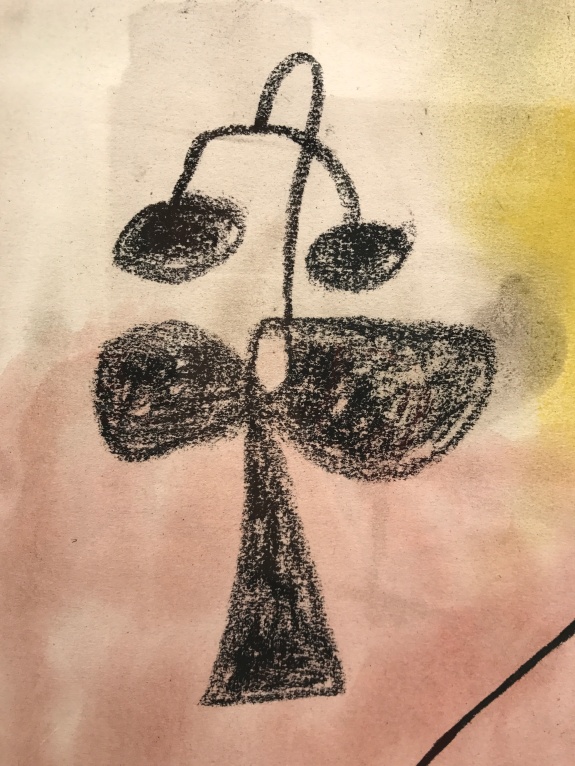 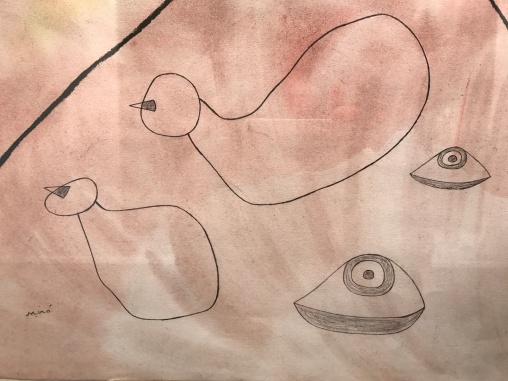 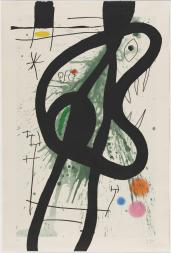 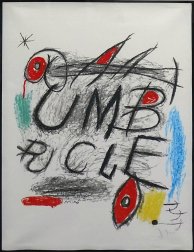 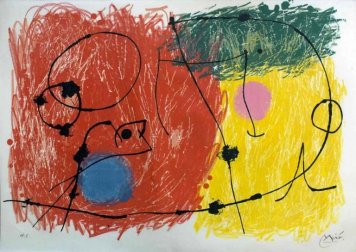 When I looked at this painting, I was wondering “which fantastic master could paint so primitive yet so powerful  ?” Not surprisingly, Picasso’s signature is on the right top corner of the painting. But still, surprisedly, he did the painting when he was 84 years old, 8 years before his death. I should feel lucky to keep the ability to draw like a child, but once again when I looked at Picasso’s painting closely and carefully, I learn about the composition, keep the space, layers of colors, the heavy brush of paints, which I didn’t notice before.

How to learn more from Picasso, I like the pointed mentioned by Eric Kim in his article:  10 Lessons Pablo Picasso Can Teach You. 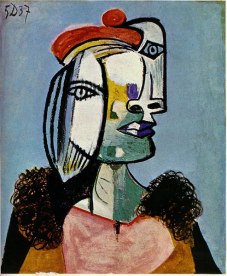 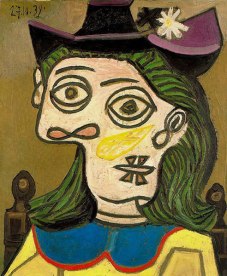 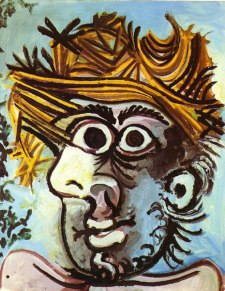 “Her work, meanwhile, is striking for its spontaneity, energy and freedom. Like Philip Guston or Jean-Michel Basquiat, her figures seem crudely wrought. If something goes wrong, she’ll happily just cut it out and patch over the canvas. “You do a bit and it’s horrible,” she says. “And you take it off and try it again.”

Perhaps what Wylie’s art most strongly communicates is the rebellious possibility of simply seeing things differently. She watches as the endless stream of films, news stories and magazine pin-ups parade past, taking something back and making it, uniquely, her own. Throughout her home, even the smallest details defy conventional order.”  — the Guardian

Rose Wylie is alumni from RCA, the first time I saw her painting, I was screaming “What? This is my drawing when I was a kid and teenager !” Well, even though my drawings are still childlike, somehow I didn’t have enough confidence to paint like a child and pushed myself to paint “better”. Rose Wylie’s artwork confirmed my confidence in my style, but what I should learn from her is that, she is clearly knowing why she draws each brush, and her courage to play with paints, to make the canvas look uninhibited and free.

Btw, she is 84 years old now. Even she said, “I want to be known for my paintings – not because I’m old.” The same age when Picasso drew the painting “Man and Nude Woman”. I hope I don’t need to wait till I’m 80s then found my courage and language to paint really who I am. ”

Before death, the elders keep everything open and become children again.

“Bjarne Melgaard is a contemporary Norwegian artist working in sculptural assemblage. In installations that include paintings, videos, and mixed-media works, the artist explores themes of substance addiction, sexuality, and self-destruction.” — Artnet 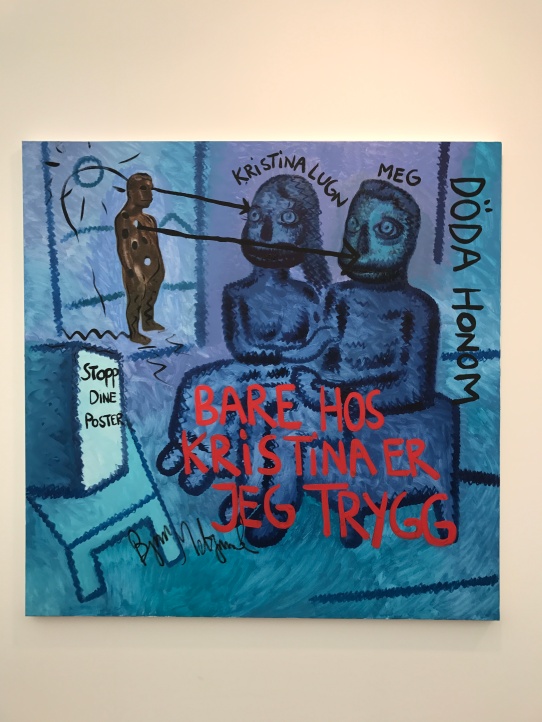 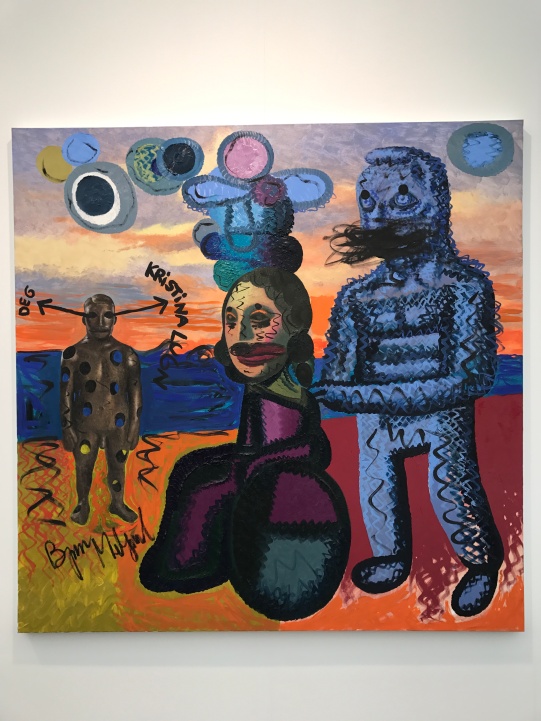 Bjarne Melgaard’s paintings touched my heart. It’s frank, expressionistic and emotional. Looking at the spontaneous and uninhibited brushes to paint each color and lines, it’s out of control, strongly expressing mixed feelings, especially adding texts. Just as the description of his works at Artsy “His expressionistic paintings incorporate texts that have a confessional quality, revealing desires, fears, violence, personal anxieties, drug-taking, and sex, though whether these relate to a fictional or real persona is left ambiguous ”

I’m an emotional person, people read everything from my face, but somehow I’m also self-controlled. Sometimes I could feel that the bottleneck for me to improve my art is this self-control which becomes self-limitation. After researching Bjarne Melgaard’s paintings, I decided to discover my self-emotions for self-portraits projects, Instead of hiding and controlling, I will express them into paintings. 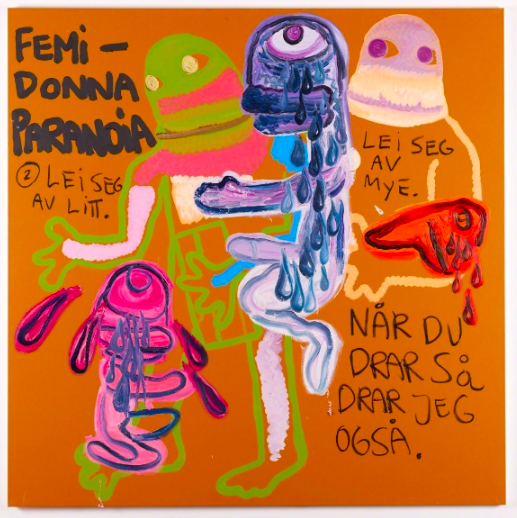 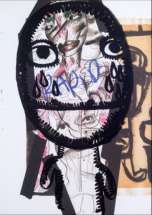 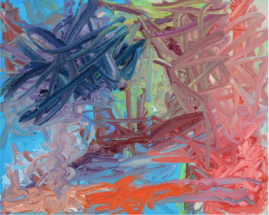