A city was born by the river, the river carried the glory of a city.

Early civilization grew up in the world’s great fertile river valleys, the Euphrates and the Tigris in the middle east,  the Indus River in India and Pakistan, the Nile valley in Egypt, and the Yellow River in China as well as known Huang He River Civilization.

In modern society, world-famous cities are still bonded together with great rivers, London and the Thames, Paris and the Seine, Amsterdam and the Amstel, Budapest and the Danube, Saint Petersburg and the Neva, Varanasi and the Ganges,  Shanghai and the Huangpu, Hong Kong and the Pearl, Bankok and the Chao Phraya, Vietnam and the Saigo, Cairo and the Neil…….

So, I added a long strip cloth and colored it into blue as the river, where would be the cradle of the civilization. 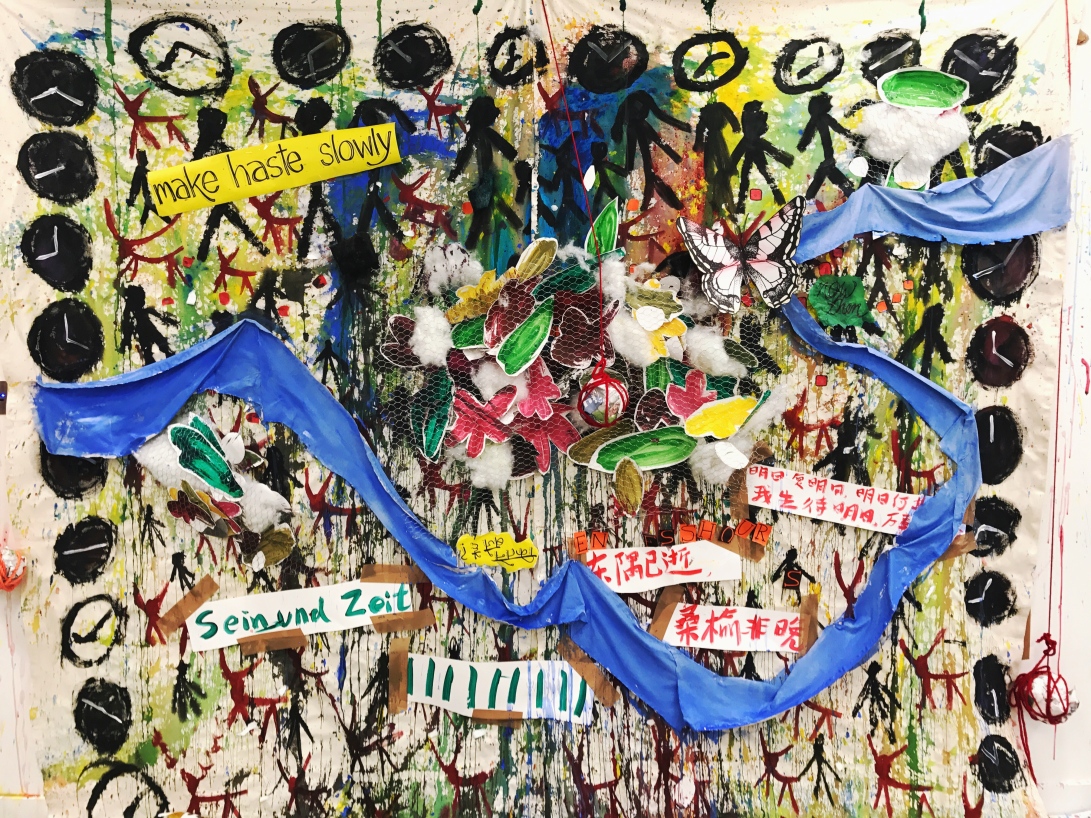 “If you want to be rich, you must first build roads, “ says a Chinese proverb, which valued that develop infrastructure adequately.

I added more strip cloth and color them into brown or black red as different roads, some were wide while some were narrow. but all roads go to the butterfly. 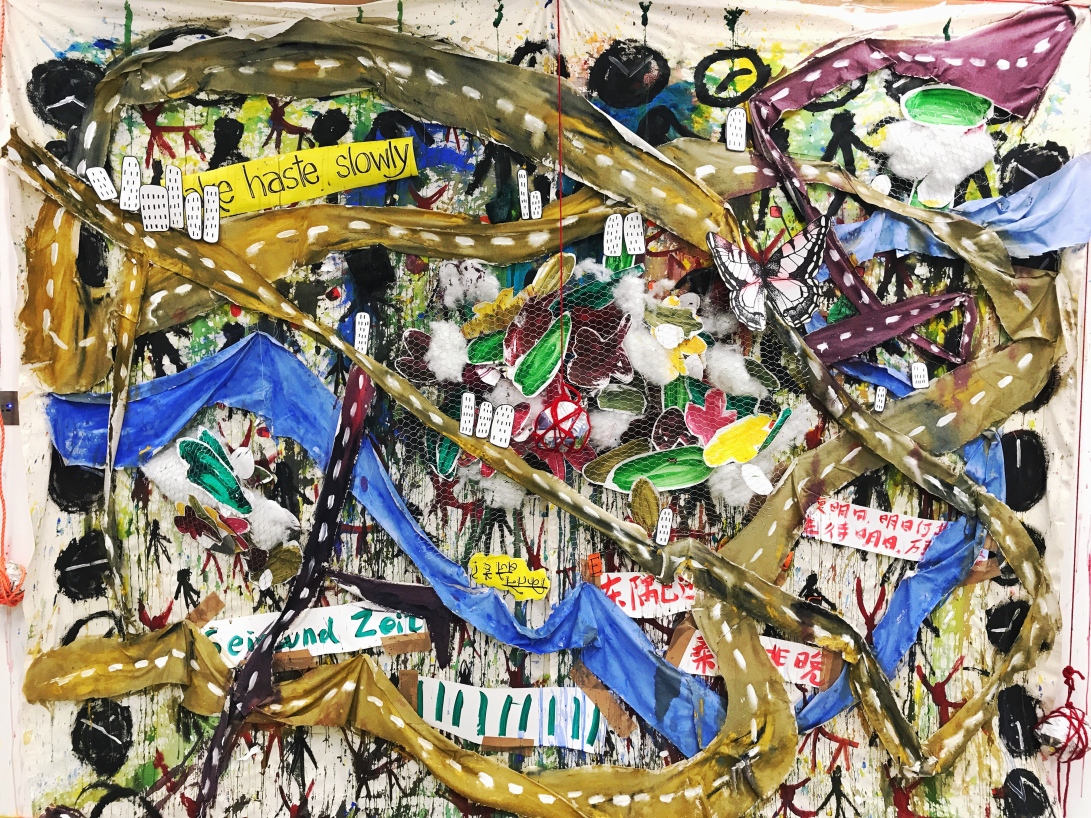 Purvi started to draw buildings on white cardboard and put them along the river and roads, “I want to put buildings everywhere.”  She said.

Buildings, shouldering in silence the heavy weight of the history and dreams of each individual who wishes to keep a foothold and gain achievement in this city. 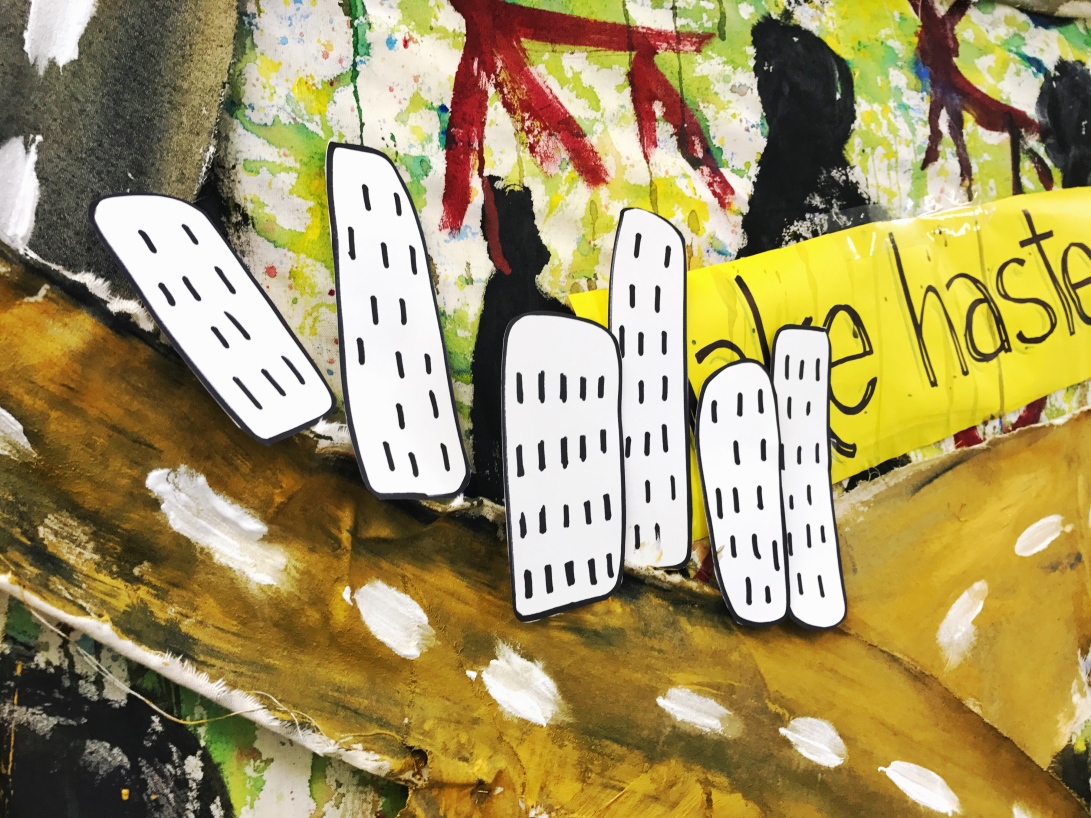 I cut lots of people figures with orange papers and stuck them around buildings and roads. As what Desmond Morris said “The city is not a concrete jungle, it is a human zoo. “ 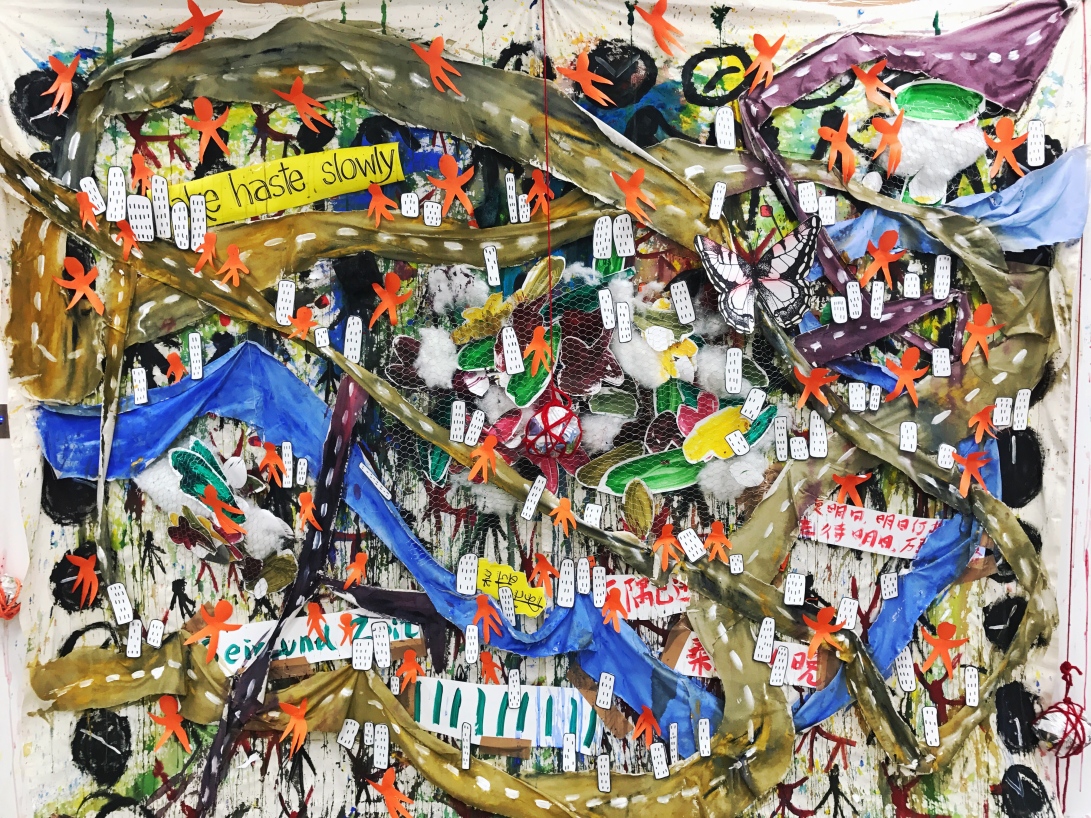 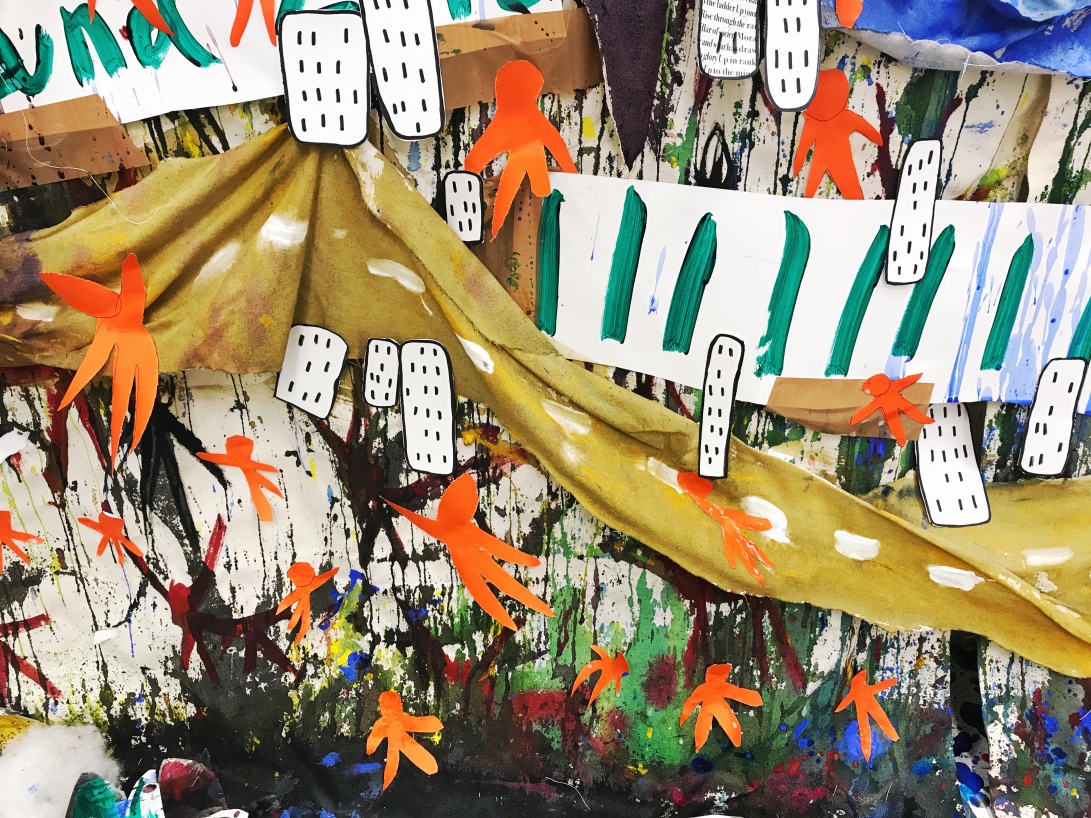 After sticking countless of buildings and people, the city is so busy and crowded. Purvi said that “We need some green.” She used some green pleating paper to decorate the city but was still not satisfied. After thinking for a while, Purvi started to paint some places into white. 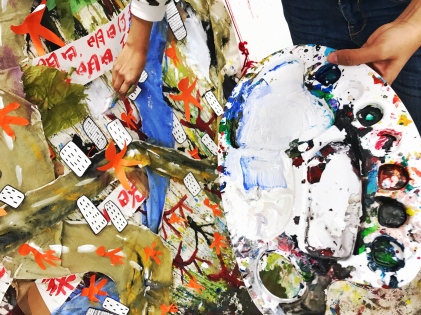 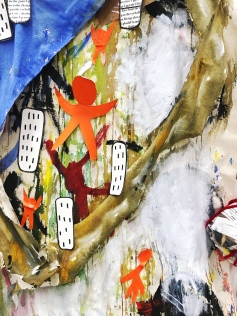 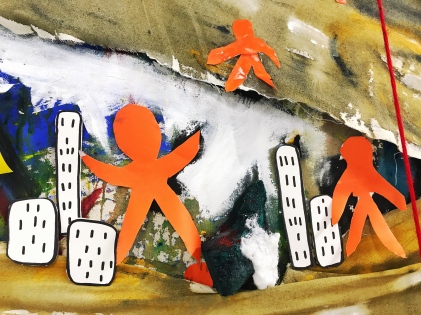 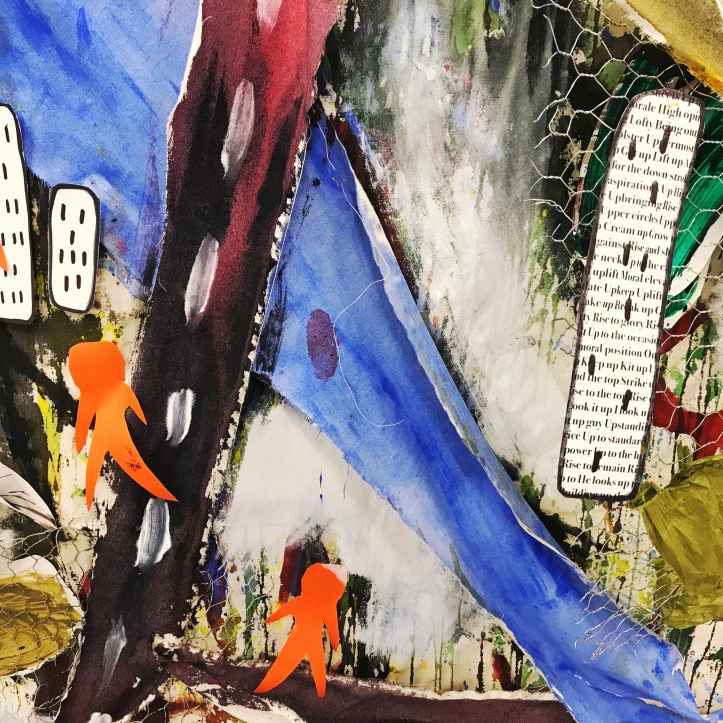 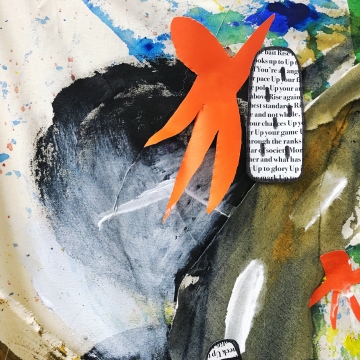 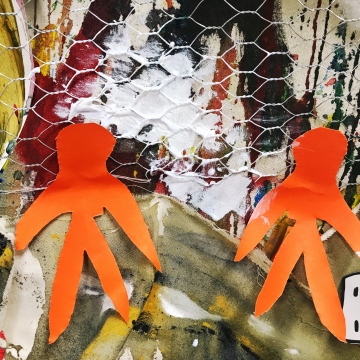 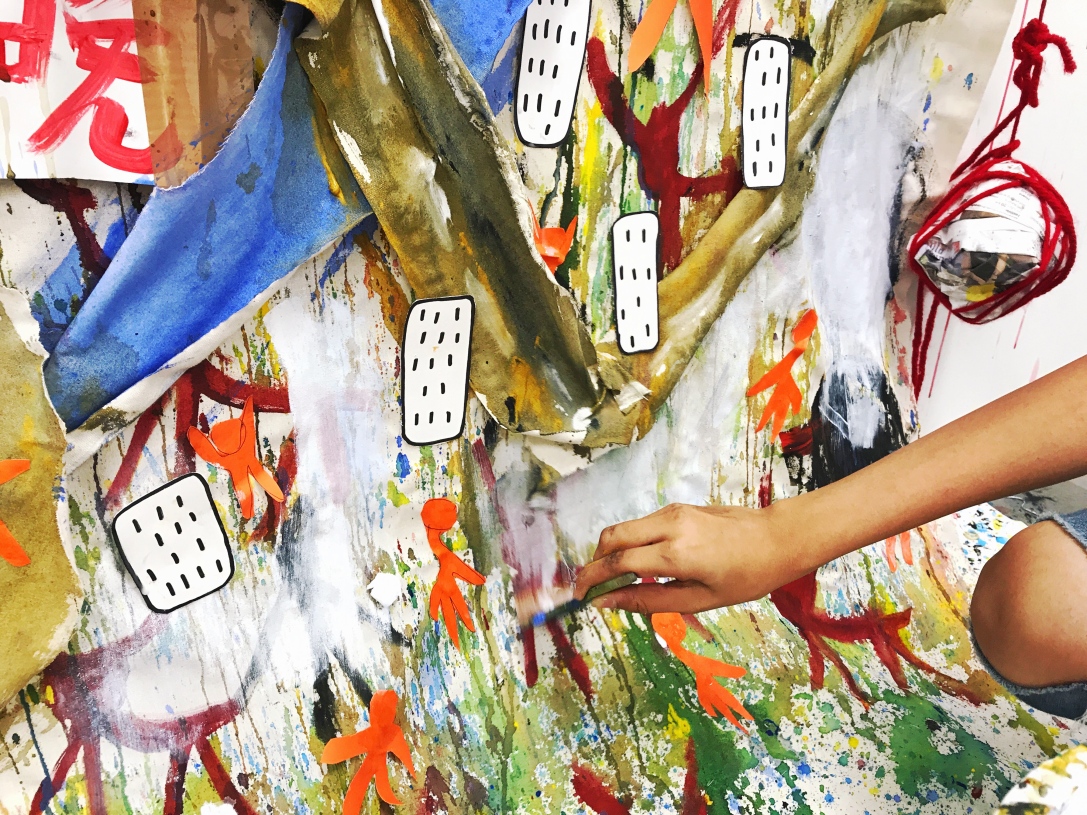 “Now it’s better, people could breath.” She looked at the canvas satisfyingly after painting some parts into white.

I looked at Purvi coloring white, remembered what Kyung Hwa Shon reminded us, “Mowen likes coloring all the space and putting everything everywhere, there is no space left, you can’t take a breath. Purvi, you need to stop her, take what she puts off,  leave space on what she has done. ” Right now, Purvi was doing what Kyung said, which made me so glad to see a real collaboration between us on this canvas, finally,  after 4 weeks of seeking, debating, and compromises.

I knew that after her coloring some spaces into white, I would put more things, and she would take something off again. I love seeing tensions and interaction in our collaboration,  to show the difference between our identities and thoughts. It’s like when you play a game, if the opponent is weaker than you, even you win you would feel disappointed, but a well-matched adversary could inflame the battle and stimulate you to play better, which is what I need the most. So I always encouraged Purvi to be more aggressive in our collaboration, and finally, when I see she playing her real identity so great and freely here, I feel much better, for both of us. 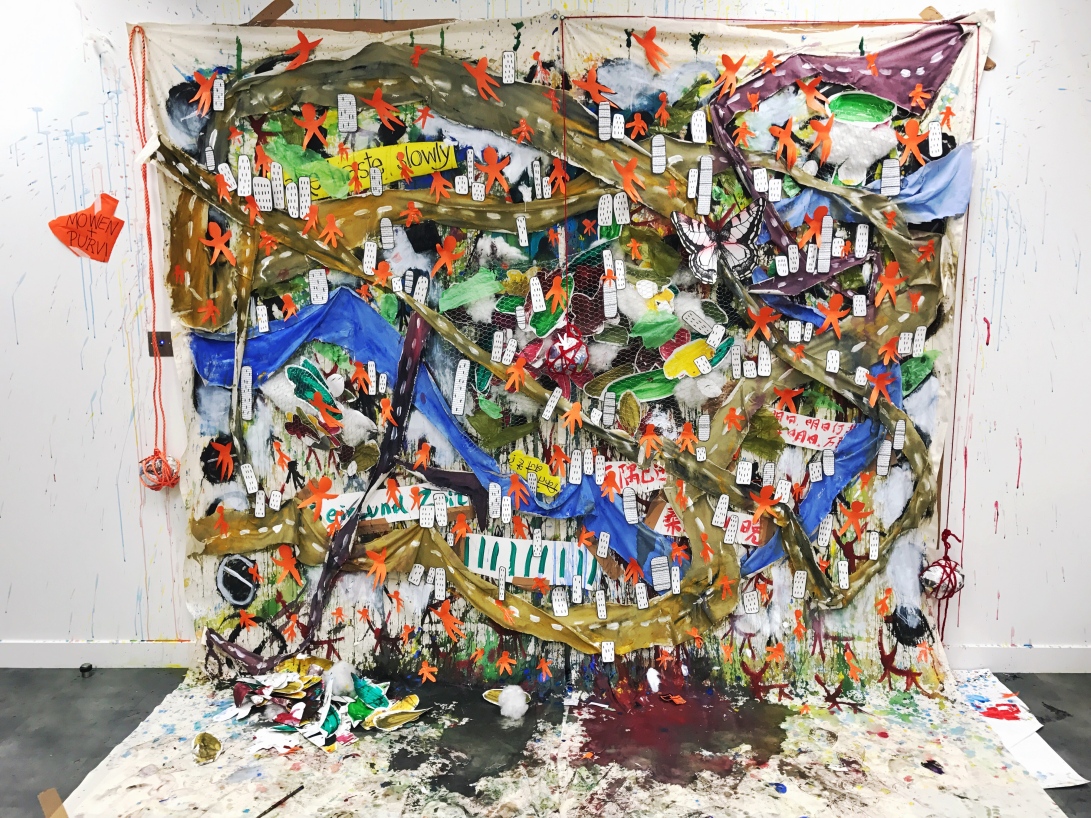 Before leaving, I sewed a crescent moon and hang it on the canvas above the river and city. Then I came out of school and suddenly saw a real crescent moon hanging in the dark blue sky, This moment was so beautiful. 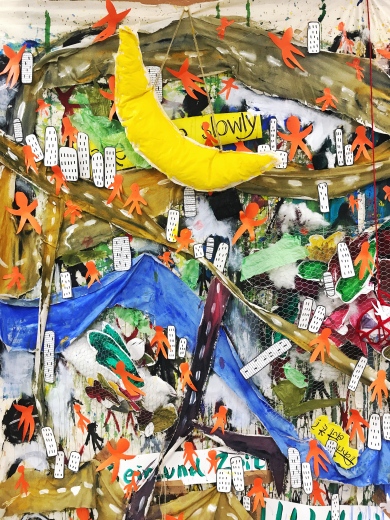 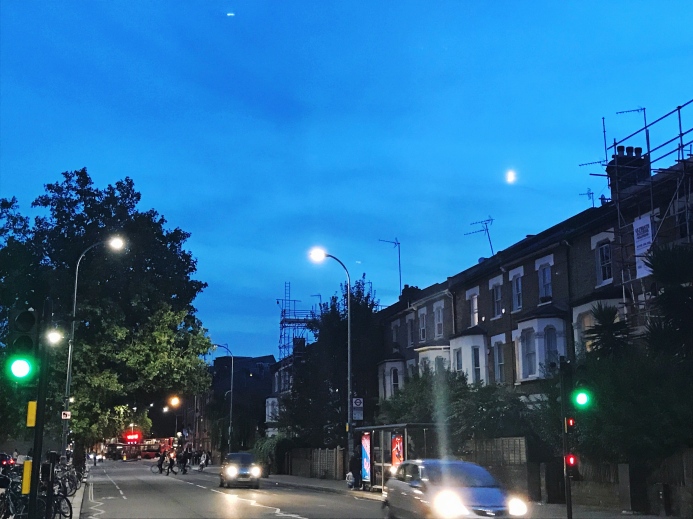 It starts getting dark earlier in London, lights from house windows, street lamps, cars, advertising board made the city nights alive.

When I cycled between the lights, it reminded me that my Mom told me that the first word I spoke was “Light”, when she showed me the light on the street in an evening.

So, immediately  I ordered solar string light, Neon Lights, and LED Strip lights from Amazon, will light our canvas up once receiving them! RCA | Navigator 1: the Shape of Time

RCA | Navigator 3: the Infinity of Being

“Navigator | Part 2: the Birth of City”的一个响应