Looking at the gound of my space, it reminded me of Jackson Pollock and abstract expressionism.

Pollock came out the drip technique and arrived at a method that synthesized Impressionism, Surrealism, and Cubism, which developed one of the most radical abstract styles in modern art. He was the leading force behind the abstract expressionist movement in the 1940s and 1950s.

Encouraged by his older brothers who pursued to be artists, Pollock studied under the Regionalist artist Thomas Hart Benton at the Art Students League. Early years painting realist murals showed him the power of large scales. Kandinsky and Expressionism transformed his style from realism into abstraction. Picasso and Cubism changed the way how he saw things from multi sides. Joan Miro and Surrealism guided him to discover the unconscious. What’s more, due to his alcoholism and accepting the Jungian psychoanalysis, he created paintings to aid his recovery. His drip and splash paintings were not only reflecting his own expression but the terror of all modern humanity during and after World War II.

Abstract Expressionism was developed in New York in the 1940s and 1950s. Pollock and other abstract expressionists were aware of human irrationality and vulnerability, they expressed their concerns in a radical abstract way. Actually, almost all the abstract painters in 1940s and 1950s were experiencing the Great Depression, Surrealism was the original influence on the themes and concepts of the Abstract Expressionists, Color Field Painting was one style of the movement too. But the main style was the Action Painting leading by Pollock, Kline and De Kooning. As what the critic Harold Rosenberg said, the canvas was not as “a space in which to reproduce, re-design, analyze, or ‘express’ an object.. [but as] an arena in which to act.”  The drips and splashes represented their struggling and unconscious.

Pollock’s contribution to this movement was his drip paintings, it was not shaped in a short time. Looking at his most famous paintings, Guardians of the Secret(1943) showed how Pollock started to put the unconscious impulses into conscious thought, representing a synthesis of pollock’s sources, in this artwork you still could see him influenced by Pablo Picasso, John Miro, and Native American and prehistoric art. Another painting Mural which was one in the same year, showed a transition from easel paintings to drip canvases. Measuring in 2.5m X 6m, it was his first large-scale work for Peggy Guggenheim’s apartment. In 1947, Pollock did his first drip paintings, Full Fathom Five was one among them, since then, he found a new abstract language for the unconscious. In the 1950s, Pollock changed his style, in the painting of Number 7(1951) he used mainly black paint instead of different colors. In the painting Blue Poles(1952), he put his shoes and footprints, shards of glass and sands in canvas. 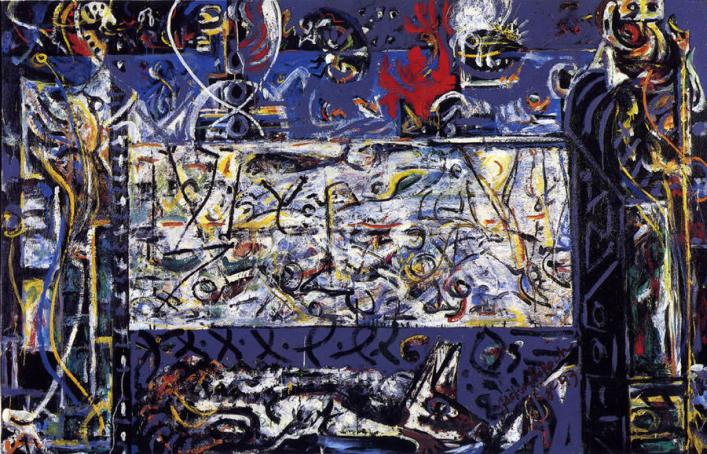 Same with Picasso, Pollock changed the way people looked at art. Pollock’s influenced Robert Morris and Minimalism, Helen Frankenthaler, Kenneth Noland, and Color Field painting. But his legacy was outside of the realm of painting, as what Allan Kaprow wrote in his article “What’s the legacy of Jackson Pollock?” He pointed Pollock’s influence was felt in performance art, he also influenced Japanese Guitar movement and the Viennese Actionists. The Abstract Expressionism also influenced  Neo-Expressionists in the 1980s like Jean Michel Basquiat and Julian Schnabel and many painters.

After watching the movie of Pollock, I made a drip painting on a transparent plastic, later I hang it as the ceiling of my space. 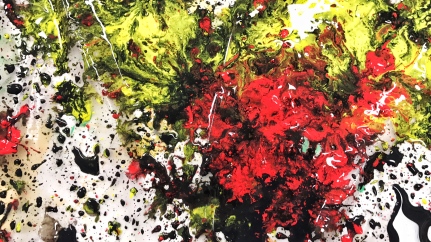 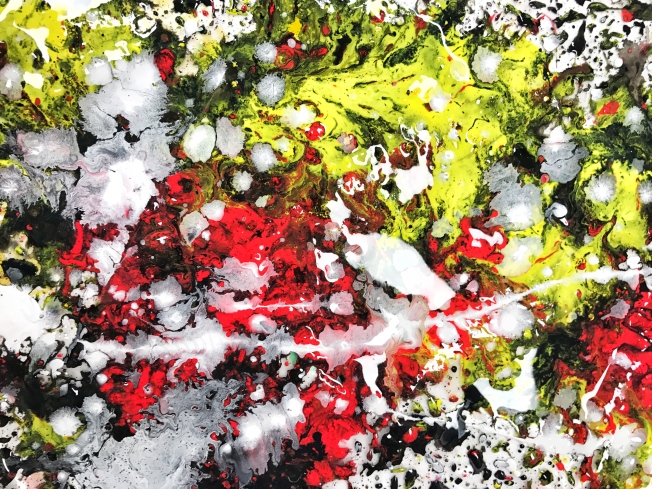 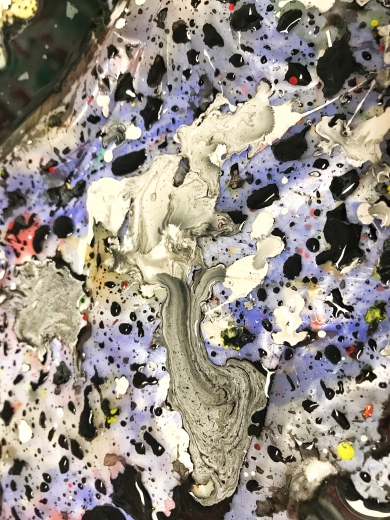