Inspired from the Canticle of the Sun, written in 1225 by St Francis of Assisi, reflect the influence of the moon in maintaining the Earth’s stability, as well as the tides and seasons and the evolution of life. 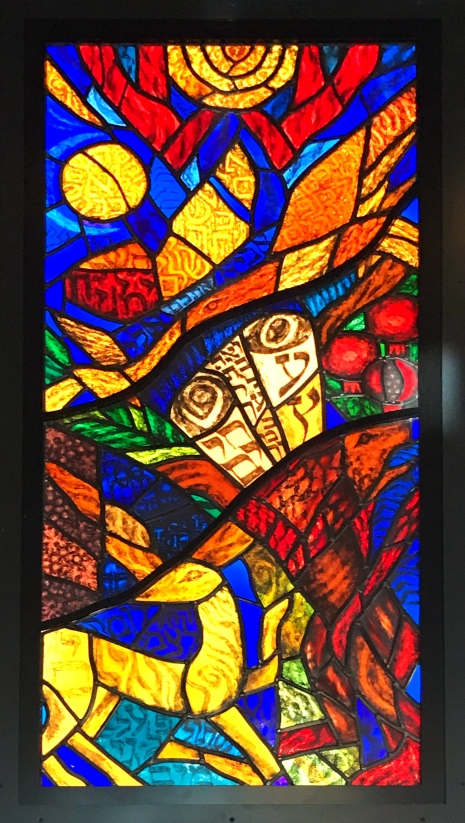 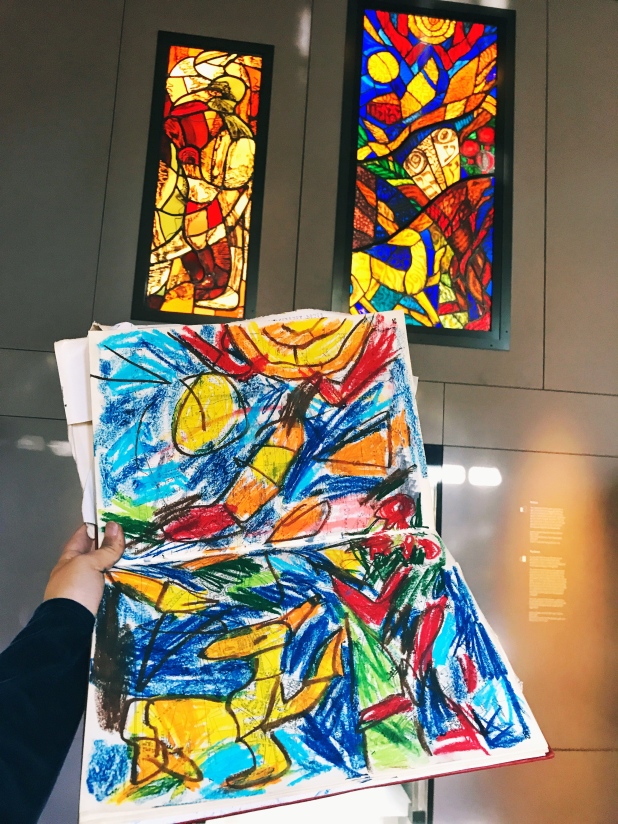 the window shows traditional imagery used in Jewish art, such as lion, the stag and the eagle, which in the Jewish faith represents God’s protection. The main color– gold, blue, purple and scarlet– are those ordained by God in the book of Exodus for the regalia of the High Priest.

Christ between Sts Peter and Paul
designed by John Piper
made by Patrick Reyntiens
Coloured and acid-etched flashed glass, with paint and silver stain
England, about 1958 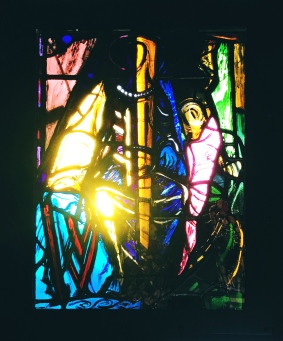 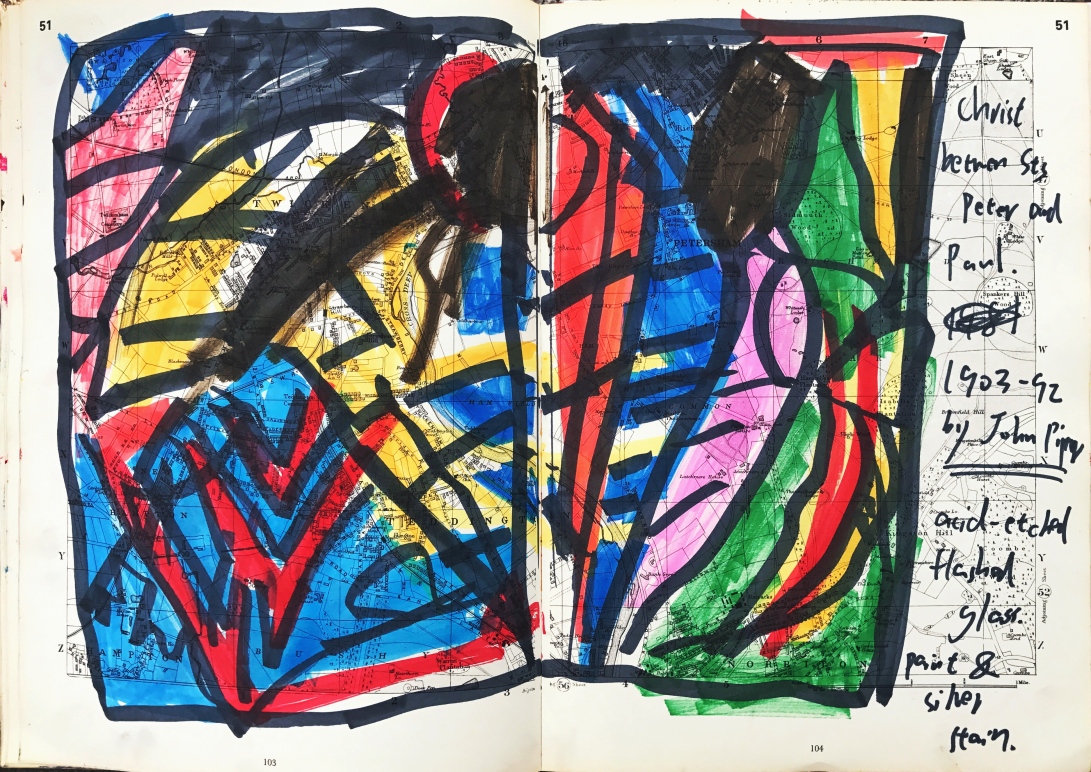 Crown for a Statue of the Virgin
maker’s mark ‘EN’ over ‘B[Z?]ISO’
Silver gilt, set with enameled silver bosses and glass pastes
Spain, about 1600 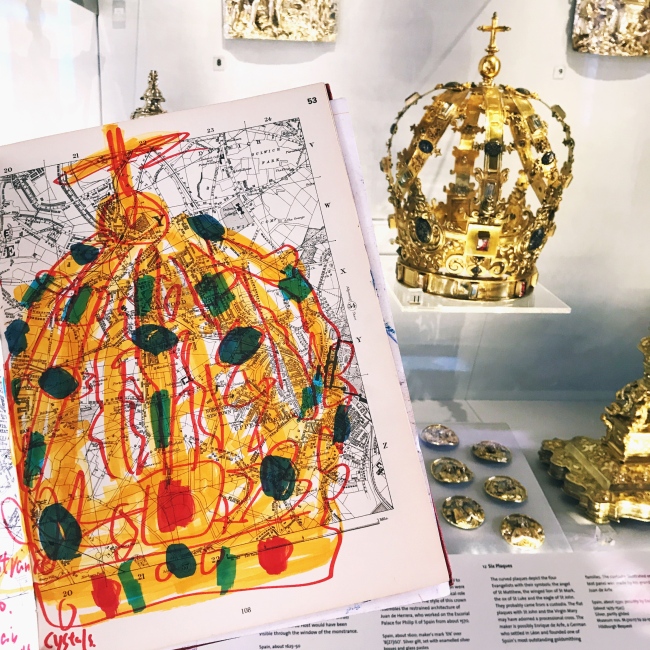 Veneration of the Virgin Mary is central to Catholic worship. Statues of the Virgin were often crowned, alluding to her mystical role as Queen of Heaven. The style of this crown remembers the restrained architecture of Juan de Herrera, who worked on the Escorial Palace for Philip II of Spain from about 1570. 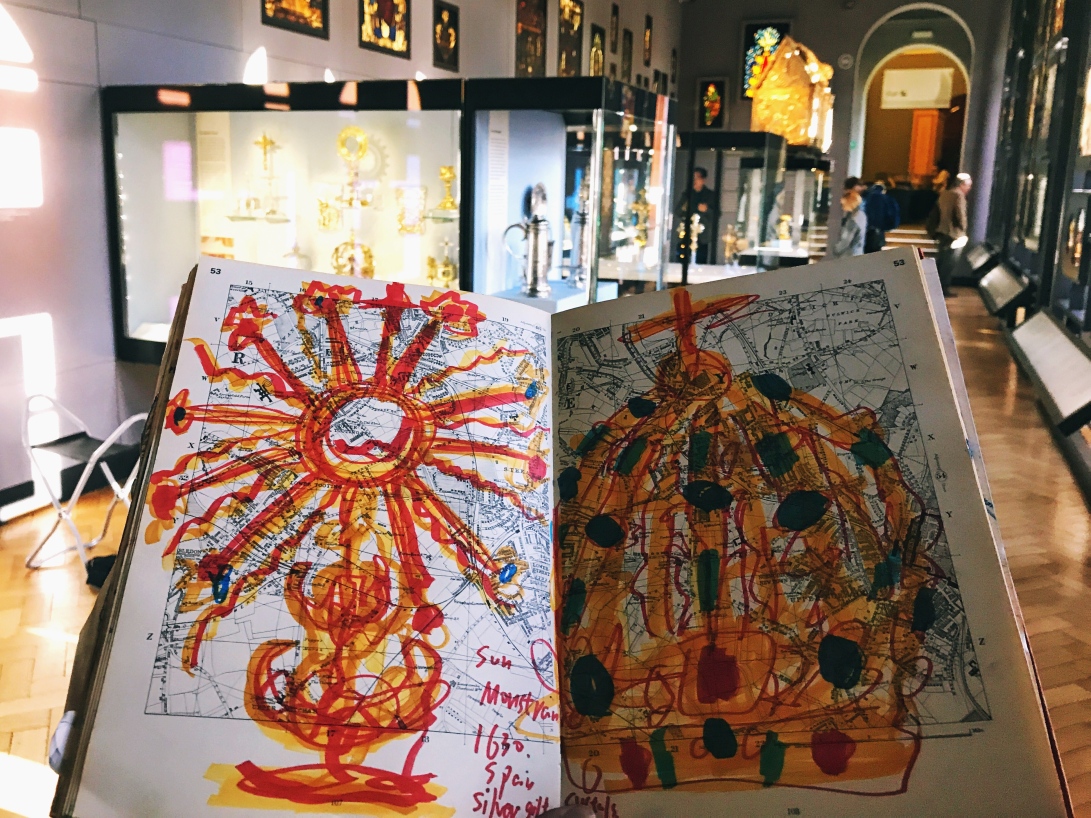 Monstrances are displayed during the annual Feast of Corpus Christi and during the service of Benediction, when the priest blesses the congregation with the Sacred Host. Sun monstrances symbolizing Christ’s regeneration and radiance first appeared after the Counter-Reformation.

This aureole, or halo, would have been placed above the head of a religious statue in a church to be venerated by the faithful. With the spread of the cult of the Virgin Mary such halos often crowned images of the Birgin and Child. Silver or gilt-brass halos were made to look more precious through the use of colorful glass pastes, such as these imitating emeralds and diamonds.

Vertumnus and Pomona
by Laurent Delvaux
Marble
England, about 1725

Vertumnus was a nature god who could assume any shape. Here he woos the nymph Pomona. He gained her presence in the guise of an old woman, but then removed his mask to reveal himself as a youthful god.

Eve Listening to the Voice of Adam
by Edward Hodges Baily
Marble
England, signed and dated 1842 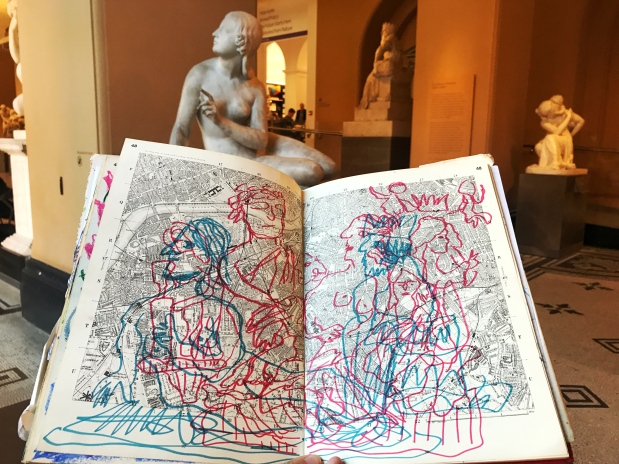 Here Baily illustrates a passage from Milton’s poem Paradis Lost, in which Eve sits beside a lake in the Garden of Eden and describes to Amam’a shape within the watery gleam. Adam warns her that this is her own reflection.

Samson and the Philistines
by Vincenzo Foggini
Marble
Florence, signed and dated 1749

This massive figure group shows the Old Testament hero Samson using the jawbone of an ass to kill two of the Philistines who were taunting him. Foggini sold it directly to the young Lord Malton, when he visited Italy in 1749 to buy works of art for Wentworth Woodhouse, the family seat in Yorkshire. 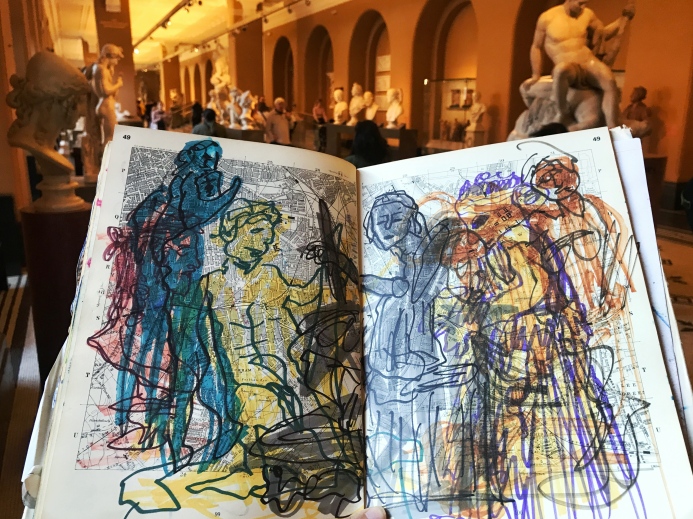 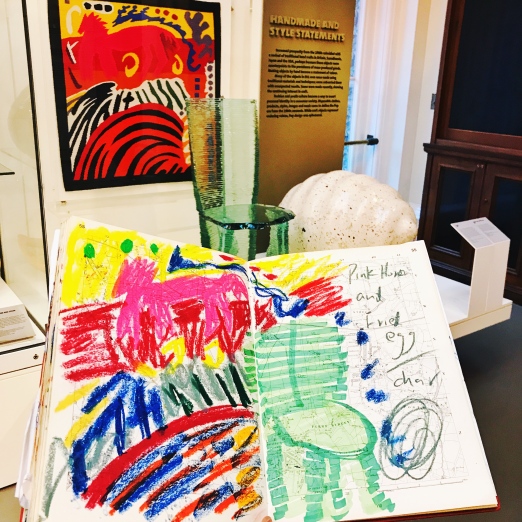 For Marta Rogoyska the weaving of tapestries is about learning from the past, being involved in the present and looking towards the future. Her work combines an ancient technique with a late 20th-century aesthetic. 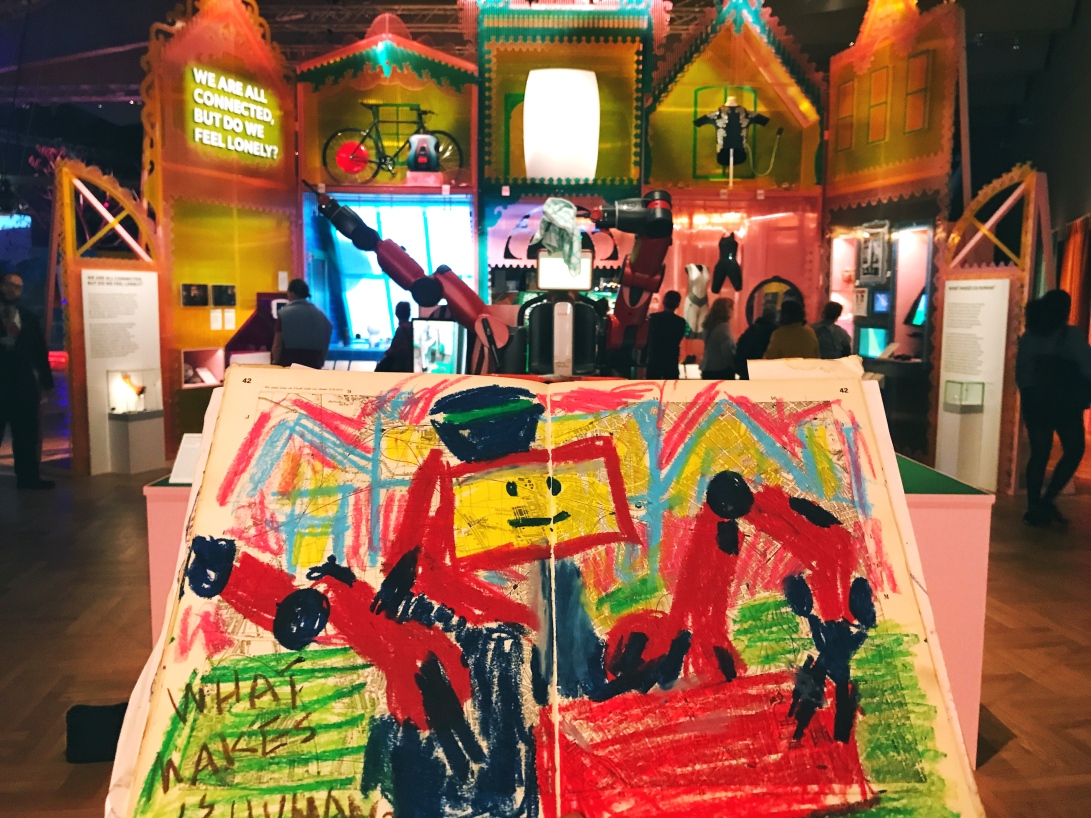 BRETT
a laundry robot in development
at the University of California, Berkley 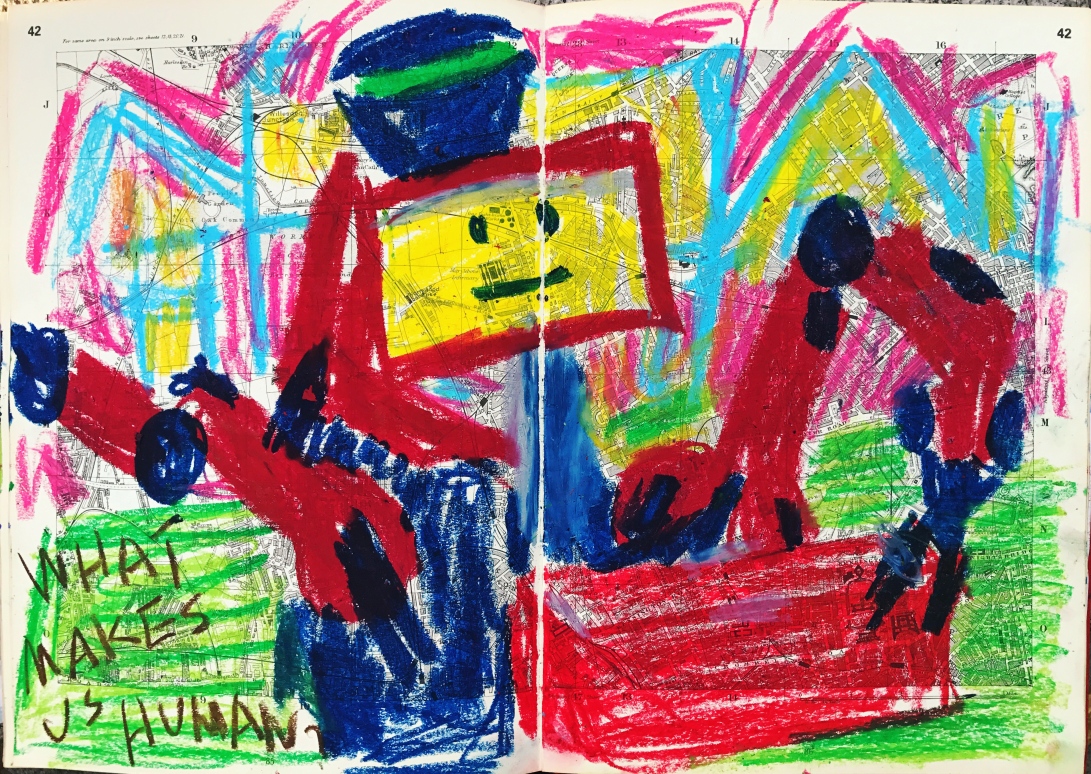 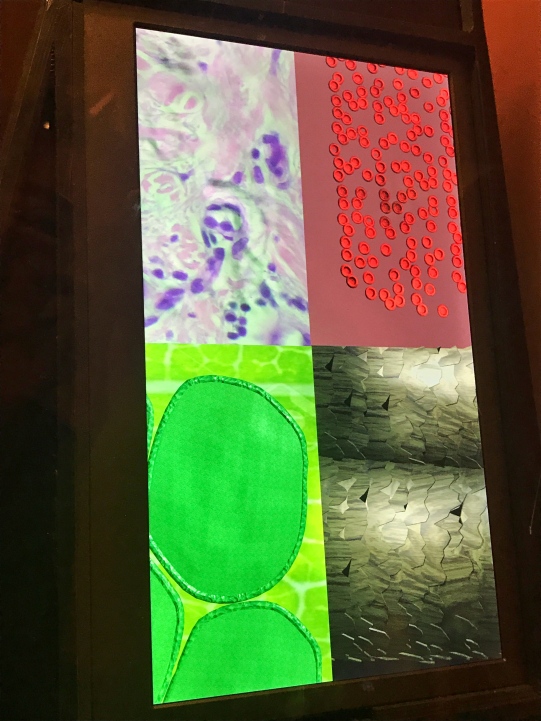 “To build the future, you need to be able to see it.”
With virtual reality to allow users to walk through the molecular and atomic landscape of a strand of hair, human tissue and blood cells, and a plant cell.

2. Public — Are cities still for everyone? 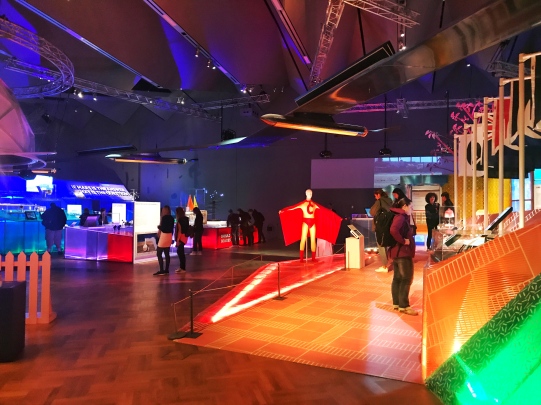 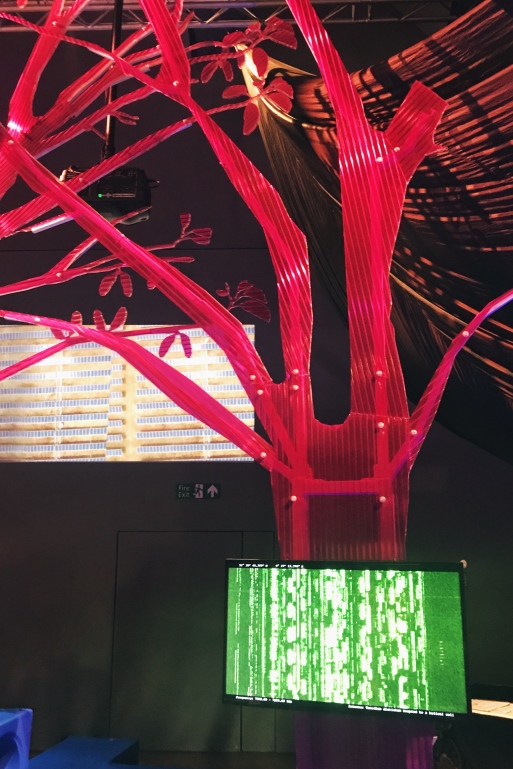 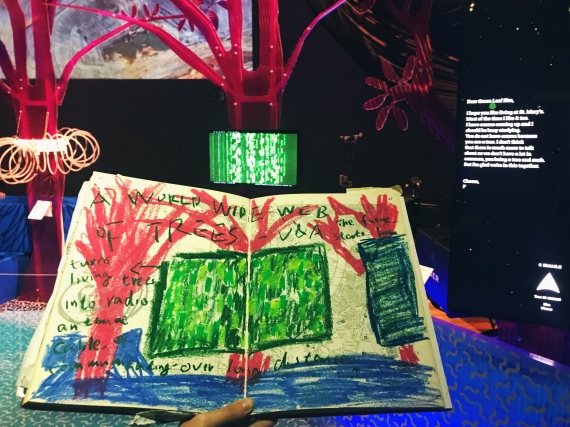 This project turns living trees into radio antennae capable of communicating over long distances. The system does not harm the trees, but uses them to amplify the signal. When the tree antennae are connected, they form a living network.

3. Planet — Should the planet be a design project?

An animated description of the likely effects of global warming on the Sahel region of northern Africa: 250,000 deaths a year, it says, even if the Paris agreement ceiling of a maximum 2C rise is met. 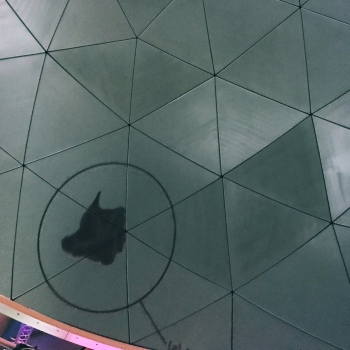 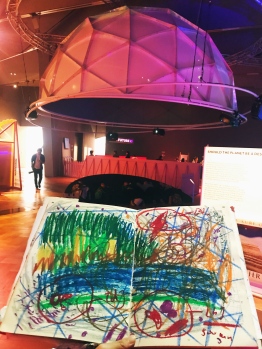 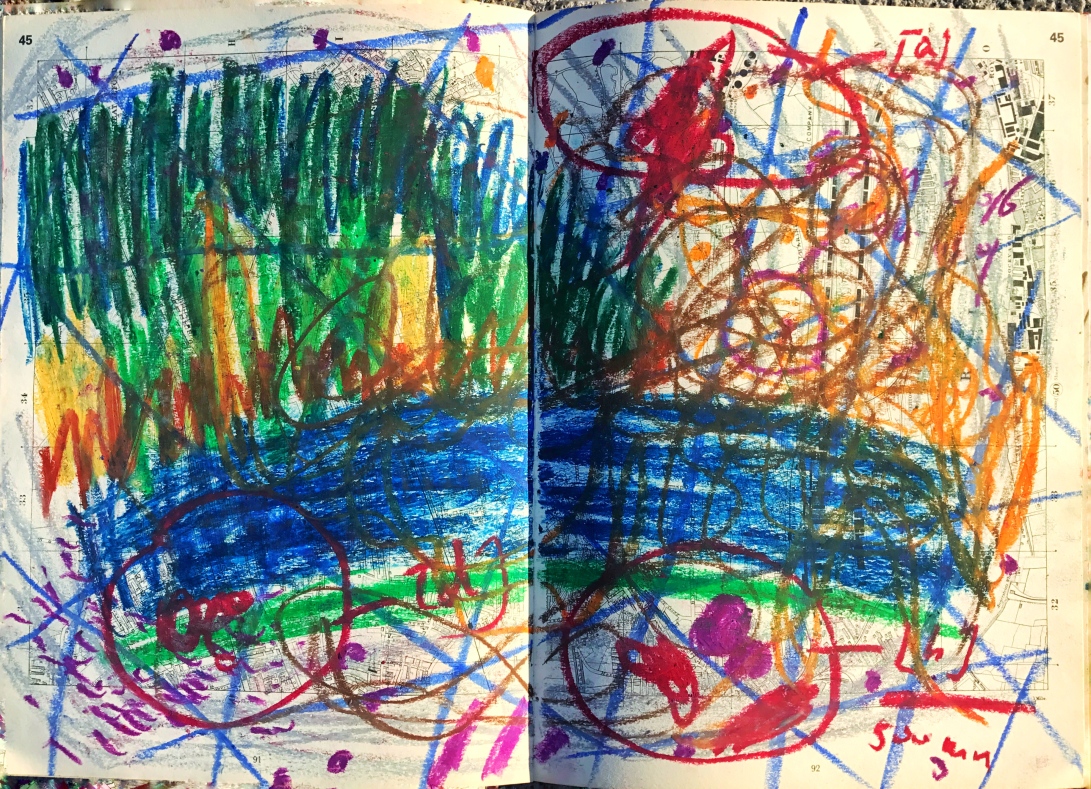 4. Afterlife — Who Wants to Live Forever? 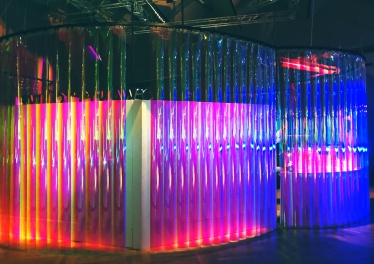 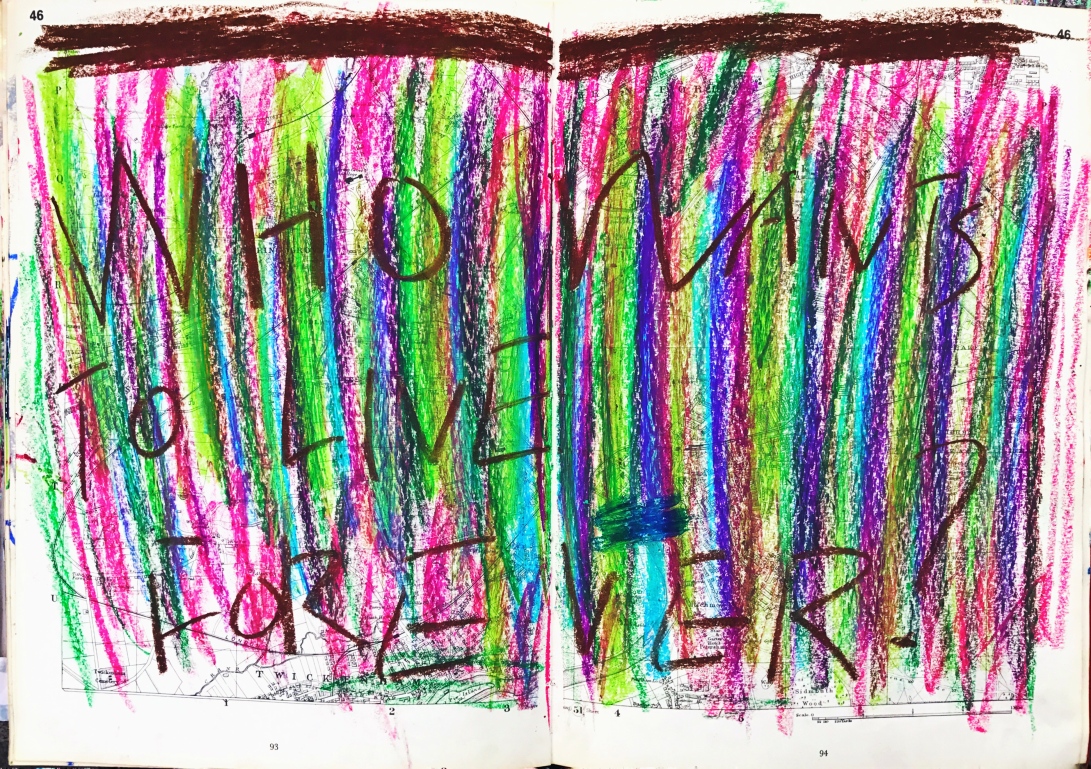 Uploading a Brain to a USB
3Scan
Whole Brain Emulation
2018 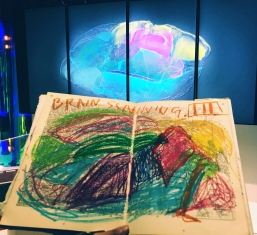 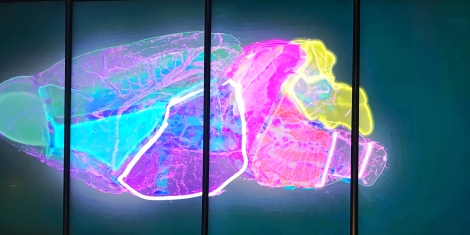 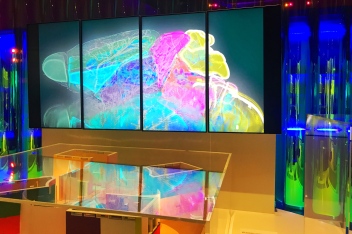 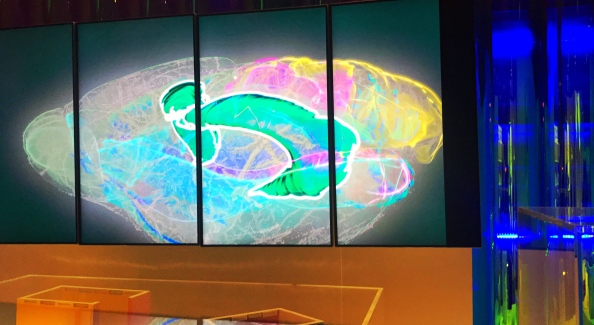 This film whos an experimental process of brain scanning, used to create a digital model of a neural network. So far it has been trialed on small animals, such as the mouse shown here, whose brain contains far fewer neurons than the human brain. Eventually, this technology could lead to the transfer of information within a brain into a digital existence. 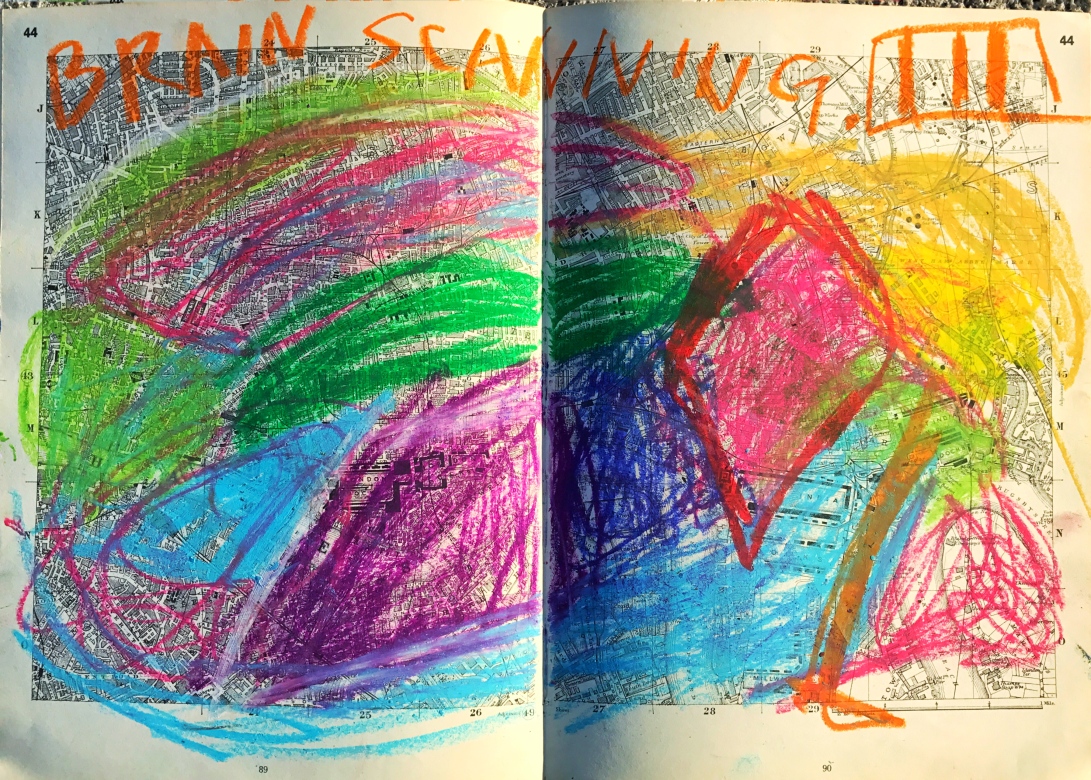 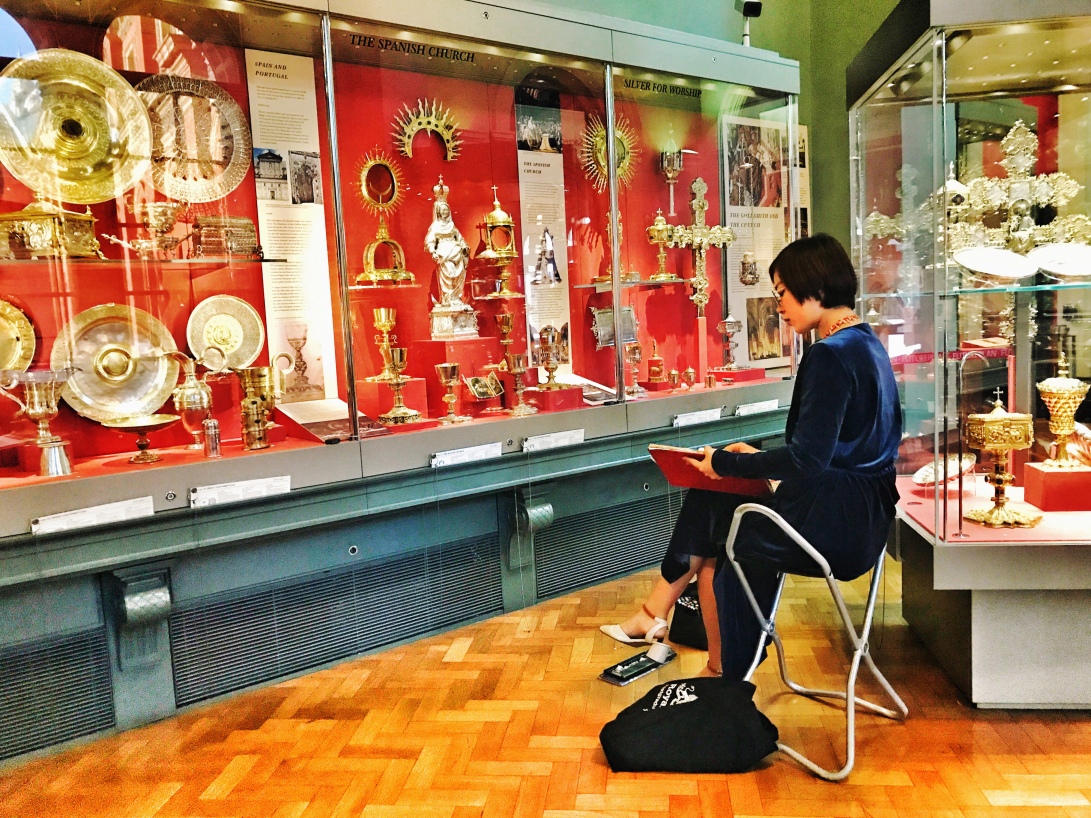